The Hanna Perkins family is mourning the loss of Virginia Steininger, who died in her home on Aug. 24. She was 89.

Steininger taught kindergarten, and was a teacher and director at Solon Cooperative Preschool before becoming the director of the child-care program at the Cuyahoga Valley Vocational School. There she taught courses in child development and helped establish the first public preschool in Ohio for children with difficulties. She then came to Hanna Perkins, where she served for 16 years as its Education Director. 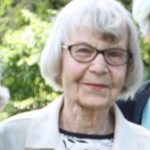 Even after retiring, Steininger maintained an affiliation with Hanna Perkins for the rest of her life. She collaborated closely with four other colleagues from her Hanna Perkins days to write a highly-regarded series of essays to help parents understand the meaning behind young children’s behaviors. Known collectively as the HPC Grandmothers, their essays were published as newspaper columns, blog posts and – just two weeks before her death – were released in a book, Timeless Advice for Parents of Young Children.

Along with her co-authors, in April 2018 Steininger was presented with the Hadden Award, for years of service to Hanna Perkins Center.

Barbara Streeter, who succeeded Steininger as Education Director at Hanna Perkins and was coordinator for the HPC Grandmothers’ writing projects, offered this remembrance:

I’ve known Ginny since she started as the Educational Director of the Hanna Perkins School. While in that position she mentored numerous teachers and supported countless children and parents who were going through challenging times.

During that period of time Ginny wrote a wonderful workshop, now an article, “Helping Children with Mastery,” that I continue to use with teachers to this day. Ginny served on the Advisory Committee of the Hanna Perkins Extension Division, and in that context became a member of the group of Grandmothers who began writing articles about things they learned in their consultations with Hanna Perkins Therapists. They wanted to share the wisdom they had gained about parenting in simple, empathic, bearable bits – and that they did.

The articles eventually became pamphlets, used by parents from all walks of life and distributed to numerous child care centers in Greater Cleveland. The articles have now been transformed into a book, “Timeless Advice for Parents of Young Children,” published just a few weeks before her death. Ginny contributed about a dozen chapters to the book, some focusing on readiness for school and separation, others on understanding bullying, still others on childhood frustrations and reactions to events such as a new baby.

The Grandmothers last contact with Ginny was on August 17, when we got together to celebrate the publication of the book and sign the first 40 copies. Ginny was just as vital as ever at the time. She drank a glass of champagne right along with the rest of us and signed each of the 40 copies. We are sad she is gone, too soon, too quick, but we are so glad she was able to be present for the benefit and to hold the book in her hands – the final fruit of a very full, productive, and meaningful career.