Why we care so much about maple syrup

One of many skills that young children begin to develop as they go through preschool and kindergarten is tolerance for delayed gratification. They practice patience.

That may be the most immediate lesson offered by an unassuming sapling planted recently on the front lawn at Hanna Perkins School.

But some day, probably at about the time this year’s kindergarteners are stressing over college applications, the new sugar maple will become a teaching tree – revisiting a Hanna Perkins tradition of collecting sap to produce maple syrup.

The practice took root in 1991, when the school was located at its old location in University Circle. That was the year Dr. Robert Furman retired from his longtime role as director of the school, and to mark the occasion he donated a sugar maple from family property in Geauga County. It was replanted on the school playground.

By February 1998 it had grown large enough to tap, and Dr. Furman – still visiting classes weekly as Director Emeritus – led the kindergarten students in tapping the tree and hanging a bucket to collect its sap.

Tapping – and learning about tapping

Preschool children watched the action through their classroom windows – knowing they would get a closer look later, when it was their turn to go outside to play. Some would stick their fingers under the tap to taste the sap as it oozed from the tree – learning, perhaps, that sap isn’t the same as syrup.

“It was as though the children couldn’t wait to get to kindergarten to have the actual experience,” recalls Karen Goulandris, who was a Hanna Perkins teacher at the time.

Children in the toddler groups also noticed something special was happening, and would go with their teachers during scheduled outdoor time to investigate.

Mrs. Erna Furman – Dr. Furman’s wife, herself a noted child psychoanalyst who was deeply involved the school – taught the teachers how to boil the sap, and consulted with them when things got sticky. 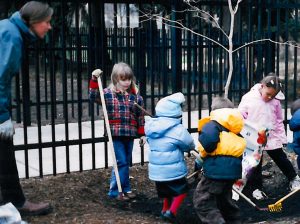 “We didn’t get a lot of sap,” Goulandris says. “One time we over-cooked it – and ended up with some delicious maple candy. Other times, we might end up with just enough syrup so every child could have a taste. One time we got enough to enjoy it with pancakes for lunch.”

Hanna Perkins opened at its current location in 2003 – just months after Erna and then Robert Furman died. In their memory, another maple tree was moved from their rural property to the new Hanna Perkins school.

It was planted in the preschool playground, in a hole that had been prepared by some of the kindergarten students. Only now is it growing large enough to tap.

In the intervening years, Dr. Lydia Furman – daughter of the Furmans and a Hanna Perkins trustee – has continued to provide sap to boil.

“Hanna Perkins School has always incorporated some sort of gardening and learning about nature into its curriculum,” offers Goulandris, who is now Assistant Professor in Early Childhood Education and Teacher Education at Cuyahoga Community College. “Best practice in early childhood education is based in theory that supports the benefits of helping children understand themselves through the natural world.  Hanna Perkins has been the model of such best practices since its inception.”

In 2012, when Goulandris left Hanna Perkins to embark on the next phase of her career, members of the small staff took up a collection for a gift in her honor: a new sugar maple tree that would some day be accessible to the kindergarten class. “I think it was hard for the kindergarten children to take ownership of the tree when it was on the preschool playground,” Goulandris says, “so I thought that having one in their own space would help with ownership and investment in the process.”

Sugar maples are native to Northeast Ohio, but they aren’t readily available for purchase.

“The market wants fast-growing trees like red maples and silver maples,” said Mark Derrickson, owner of Ardmore Tree Service. “They all have sap and can be tapped. Sugar maples grow slow, but they have the high sugar content that makes for the best maple syrup.”

Ardmore Tree Service located a sapling, transported and planted it – and in the end donated a portion of the cost, which is about twice that of faster growing varieties.

The tree is located on Hanna Perkins’ front lawn – not far from where a mature oak was brought down by a severe storm in 2012. It is being watered daily in a shared effort by members of the Hanna Perkins administration and staff. Its trunk needs to reach a diameter of 10-12 inches before being tapped. By any estimate, that will take at least a decade.

Until then, in early spring, the school will boil sap donated from other sources.

And everybody will practice patience.