In memory of Kim Sherwin

Hanna Perkins Center lost a dear friend and kindred spirit last week with the death of Kim Sherwin on Aug. 8, 2022 after a brief illness. She was 82.

She was an avid traveler and patron of the arts – experimental as well as traditional. She was known for her humor, intellectual curiosity and generosity. Sherwin was a lifelong philanthropist who made an impact on dozens of area organizations involved with causes ranging from economic development to education to public broadcasting.

She served on the board of the Citizens League of Greater Cleveland evaluating candidates for office. And she was proud of her lifelong support for Laurel School, which she attended as a girl. 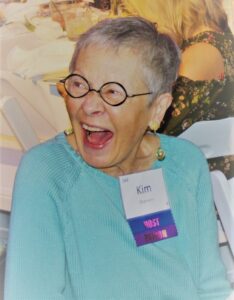 As a younger woman, she volunteered to work with children living in poverty through organizations identified with Cleveland’s “settlement” movement, and continued throughout her life to help raise funds for the Greater Cleveland Neighborhood Centers Association and local Multi-Service Centers.

Among the organizations she held most dear were those that focused on mental health, including Magnolia Clubhouse and Hanna Perkins.

She became involved with Hanna Perkins late in life, after being introduced to the way we work with children and parents to address developmental challenges and bring families together. She was struck by the way our gentle approach helps children build self-esteem by empowering them to communicate their needs and interests. Contrasting it with her own “old-fashioned upbringing,” Sherwin said she wished Hanna Perkins had been in her life when she was a child.

In 2019, she was honored with the Hadden Award for her embodiment of the Hanna Perkins mission, and dedication to helping improve the lives of children across the region. “People who need help shouldn’t have to walk alone,” she said.

The family will have a private graveside gathering at Lake View Cemetery. A celebration of life for family and friends will be held at a later date.