6 strategies for talking about the election with your children 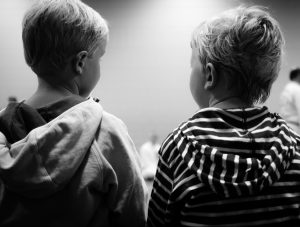 A few days after the presidential election, in one of our own classrooms, a 5-year-old declared, “My Mom voted for Trump.”

“Trump’s an idiot!” a 6-year-old classmate replied. And then a teacher stepped in.

In our schools, on the playgrounds, in our homes, conversations like this are going on amongst children ages 2 to 18 – often as not, unsupervised. Older children have been suspended from school for posting threats and ridiculing others.

This post is not about politics, it is about the things children hear and say. How do we, as parents and teachers, help them sort it out? How do we help those who are frightened to feel safe?

Here are six strategies for talking to your kids in this heightened political environment:

1. Start by listening. Before rushing to explain, ask questions, listen to the answers and ask more questions. When your child says “Trump is mean” or “Hillary was bad,” find out what he thinks is meant by the word “mean” or “bad.”

2. Try to uncover misconceptions and provide context. For adults, presidential elections happen every four years. For young children, it’s a once-in-a-lifetime experience. Adults understand concepts like voting but often forget to explain it to young children. One 4-year-old understood voting to mean, “Whoever has the most signs.”

In general, children are exposed to much more than they are ready to understand. They hear adults talking, they perceive how we feel and they catch bits of information on the news that seem unfamiliar and strange.

3. Understand a child’s concerns in the context of her world rather than yours. Younger children worry most about their parents’ well being. It’s scary to see a parent very upset or very angry. Ask if she noticed you were upset and if it scared her. Then reassure her that even though you had big feelings, you are OK and nothing bad is going to happen.

Older children may worry about the things that will happen to themselves or children they know if the laws change or if people are fighting. Will the family have enough money? Will a good friend be sent away? Most often, these worries can be assuaged by realistic responses. When they can’t, children need to know that they shouldn’t have to worry about it – the grown ups will be taking care of what happens and how the problems are solved.

Adolescents need to be able to talk with adults about their various questions and ideas about world affairs without it becoming a debate or argument. Just a few reality oriented comments and factual questions here and there are often sufficient to help ground them as they move forward in their thinking. They may project anxiety about themselves and worries about being out of control by criticizing everything in government and how adults are handling things – and this is healthy. What isn’t helpful is when they’re left to work out these things alone or among themselves without the grounding of safe, caring and respectful adults. That’s when talk can escalate and adolescents begin to act out.

4. Be judicious with punishment and discipline. Children who post threats, talk meanly to peers or engage in unsafe behavior are often doing so in order to ward off their own sense of vulnerability in the face of the unknown. The first priority is to stop the behavior before it creates harm to them or anyone else. After that, help them give voice to their fears in a situation where they feel safe, perhaps at the family dinner table, or in quiet conversation one-on-one. Then, after showing compassion and acknowledging their own concerns, determine what consequences are appropriate for their behavior – with a sincere apology to anyone they’ve mistreated often being the most important thing they can do.

5. Reduce media exposure. Shelter children from the media as much as possible. When they are exposed, help them understand that everything people say on TV is not necessarily true, and that watching people yell at each other or do mean things doesn’t help anyone figure out how to solve problems.

6. Be prepared to discuss it again. Don’t assume all is resolved after discussing a worry. Children are constantly re-thinking everything you say and do, everything they see and hear. Stay alert for signs that they’re ready for the next dialogue.

Barbara Streeter is Director of Hanna Perkins School, and Faculty Chair of the Cleveland Child and Adolescent Psychoanalytic Training Program. Prior to these roles, Streeter served as the school’s Therapy Director since 1997. She was Associate Director of the Hanna Perkins Center Extension Division from 1989 until 2003. She is an instructor and consultant to early childhood programs in the Greater Cleveland community and throughout the country.