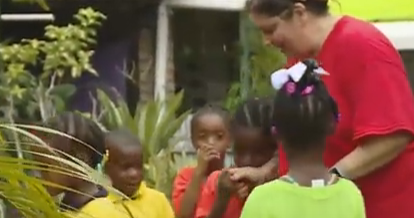 While team members at The Hanna Perkins Center for Child Development were preparing this summer for the first broad-based rollout of “My Mad Feelings,” a bullying prevention curriculum for children as young as 4, Clinical Director Kimberly Bell was giving the program a cross-cultural test at a school in Trinidad and Tobago. While the test was informal, the results, she said, were strongly positive.

While most anti-bullying programs focus on adolescent children, the origins of bullying can be recognized at a much younger age – when children first go to school or child care, and are learning to advocate for themselves in a social setting.

When angry, scared or otherwise bothered, young children “share” the way they feel by grabbing, hitting or saying hurtful things –acting out the feeling so others feel it too.

This is normal behavior, and it signals a developmental readiness to begin learning how to express themselves verbally instead. Otherwise, their behavior makes others angry and invites disciplinary action, creating a downward spiral in self-esteem. By adolescence, these behaviors may become habitual, and are recognized as bullying. (Learn more about My Mad Feelings here.)

“My Mad Feelings” is classroom curriculum for children age 4-7 to support the emotional learning process. It’s being taught in all preschool classes in the Shaker Heights City School District for the 2016-17 school year – the first time the program is being used across an entire public school system.

But as that effort was being prepared, Bell put it to use in July with a class of 5-year-olds at the Naomi Chin Kit Memorial School in Pt. Fortin, on the island of Trinidad. Bell was invited as part of a free dental clinic by volunteers from the dentistry programs and social work programs at Buffalo State College and the University of Buffalo.

Conditions for the cross-cultural test were less than optimal. While the program is designed to be taught in 12 lessons, Bell had only four. So she worked in advance with Victoria Todd, author of the curriculum, to select which sections to teach.

It’s also intended for small-group discussion, not a full classroom.

Bell observed the class before beginning the program, and said typical behaviors included impulsiveness, difficulty managing big feelings, and finding words to express feelings. She also noted a general confusion between the emotions of anger and fear.

“Their culture contains a drive to obtain limited resources, so concepts like waiting in line and taking turns don’t come naturally there,” Bell added. She described “a mad rush and a lot of crying” when crayons were placed on the table for coloring. One boy, unhappy with his picture, cried inconsolably because he didn’t think there would be any extra paper so he could start over.

“Even in the toughest possible conditions, these children responded like they were hungry for it,” she said. “After the last day, when we said our goodbyes, I’ll be darned if the two children with the biggest behavior problems weren’t sharing equipment on the playground, pushing each other on the swing. They were actively identifying feelings and seeking help in problem-solving.

“In the end, it was very clear the basic tenets of what we do at Hanna Perkins are universal,” Bell continued. “You get a tremendous response from young children when their feelings are acknowledged and when you help them give voice to those feelings.”

“The teachers were hesitant at first to believe a non-authoritarian approach was going to work. But the little 4-year-old who spent the first two days crying, screaming and running away came in on Day 3, put his backpack down and prepared for class. That’s when the teachers came to me and asked for a copy of the “Mad Feelings” teaching materials, so they could continue the process.”

Since the experience, the school director has traveled to Cleveland to observe operations at Hanna Perkins School. She is working to raise funds for teachers to travel here to receive formal training on the “Mad Feelings” curriculum.

Following is a video about the experience. Brief discussion of Bell’s work with My Mad Feelings begins at 7:10.