This year, The Hanna Perkins Center for Child Development celebrates the 65th anniversary of its founding in 1951. Whiles its origin dates to the Day Nursery Association founded in 1874, within 10 years, the Hanna and Perkins families collaborated in the operation of the nurse 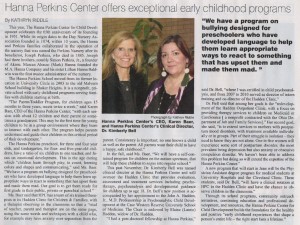 ry that was named the Perkins Nursery after its benefactor, Joseph Perkins, who died in 1885.

This article is not available for viewing on the Currents website.

Click the image to view the article in its entirety.