Community garden becomes a neighborhood hub during the pandemic

Like many buildings across Ohio, Hanna Perkins Center for Child Development got pretty quiet when the COVID-19 pandemic took over. But as the summer growing season took hold, its community garden became a center of activity.

For the past decade, families from the neighborhood have nurtured plots in the community garden, which is part of the Hanna Perkins Butterfly Garden–a gift of the Hershey Foundation.

But this year, use of the garden swelled, with 15 plots of varying sizes under cultivation.

“People were looking for activities to share with their children, and they found the garden,” says Laura Cyrocki, director of the Healthy Meals and Garden Programs at Hanna Perkins Center.  “It’s something to do together and it’s a wonderful way to help children learn about where their food comes from.”

Garden plots go for $1 per square foot for the season, with a maximum fee of $75. Plot sizes are flexible. “People take on what they can handle,” Cyrocki says. “The smallest plot is six-by-six, and we have some that are considerably larger.”

Getting the kids involved 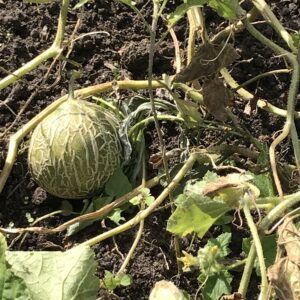 Even in a tiny plot, the cantaloupes thrived

Fritz and Molly Machmer-Wessels live half-a-block from Hanna Perkins. They leased a small garden plot for the first time this year, and worked it with their two children, ages 8 and 10.

They bought seeds as a family, choosing tomatoes, cucumbers, snap peas, lettuce, and herbs such as basil, thyme and sage. The kids wanted corn and cantaloupe. Molly says she didn’t think those would do well in such a tiny little garden, but they planted them anyway, figuring it would be a learning experience if nothing else.

The corn attracted grubs and faltered, but by late August the cantaloupe vine had several young melons, each roughly the size of a softball.

“The kids love the process,” Machmer-Wessels says. “They love the idea that we can grow our own food; they go over there with friends to show them, and share what they’ve learned about caring for the plants.”

As the garden matured, Machmer-Wessels would send the kids to fetch herbs and tomatoes while she was preparing dinner. “It gave them a sense of independence. And they made this connection between working the garden and reaping the benefits. It’s been such a delight to share as a family. They also loved being able to eat right out of the garden. It’s like a playground for their senses.”

A safe place to gather

Equally important, Machmer-Wessels says, is the way the garden became a community hub when so many other activities were curtailed during the pandemic.

“It was something to do. Every night after dinner we’d go over there, water our stuff and see what was ripening,” she says. “It was at a time when everyone was so alone. But we’d get there and end up meeting three or four other families.”

The kids would ride bikes, scooters and skateboards in the parking lot, and explore the corners of the grounds. “The garden is a space the kids like to walk through and see what’s happening. And there are some natural elements around the edges, like raspberry bushes. When you’re little, these spaces feel so big. That space has been a lifesaver,” Machmer-Wessels says. “It’s nice having an open place where we can all gather while maintaining social distancing.”

Over the summer, Cyrocki oversaw the clearing of adjacent space that had become overgrown and piled with a decade’s worth of garden debris. That opened up another 875 square feet for cultivation, and allows some reconfiguration to create easier access to some hard-to-reach parts of the garden.

“I had no idea we were going to have this many gardeners,” Cyrocki says. “Two families just joined and planted fall crops in the last week of August. Most people write off fall – they think it’s too late. But there are all kinds of things you can grow, like spinach, radishes, lettuces and sugar snap peas.”

Hanna Perkins provides wheelbarrows and basic garden tools – though the tool shed was closed this year to avoid any concerns over the spread of coronovirus. And Cyrocki provides support and encouragement. “Mostly, I encourage them to talk with each other; we have people here who have been gardening for decades,” Cyrocki says. “But I make myself completely available because I could talk about gardening 24 hours a day.”